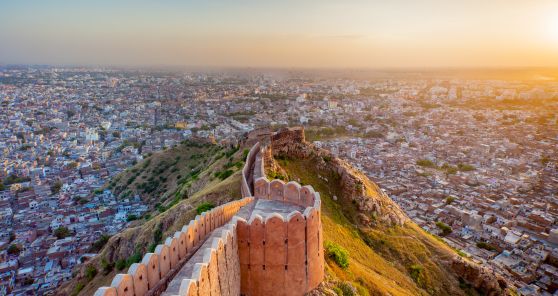 Nestled in the Aravali Hills lies Jaipur, Rajasthan’s capital and ‘Pink City’ because of the extensive use of pink in the city’s buildings. Built almost two and a half centuries ago by the warrior-astronomer King, Maharaja Jai Singh II, Jaipur was Rajasthan’s first modern city. It is extremely easy to navigate your way around this city as you visit the City Palace, appreciating the Muslim-influenced Rajput architecture and the Hawa Mahal, the city’s iconic symbol. With 152 windows and in Jaipur’s characteristic pink colour, the Hawa Mahal offers stunning views of the city. The Jantar Mantar observatory close to the Hawa Mahal stands testimony to Raja Jai Singh’s interest in astronomy. Even today, there are some working instruments at the observatory – don’t miss the sundial there. Almost overlooking Jaipur from various hilltops are forts that add to the city’s charm. The most famous is the imposing Amber fort, built on a rocky mountain side. It was the capital of the ancient capital of Jaipur state. Jaigarh fort has reservoirs, residential areas and the world’s largest wheeled cannon. Jaipur is a shopper’s paradise, from blue pottery items to razais (quilted blankets) that weigh as little as 300 grammes, block printed fabrics to jewellery, Jaipur has it all. Ajmer and Pushkar: Ajmer’s proximity to Jaipur (it is only about 140 kilometres away) makes it a popular destination with those visiting Jaipur. Once the stronghold of the Mughals and British, (they used its strategic location to control the states of Rajasthan and Gujarat), Ajmer later gained fame as a site for pilgrimage. Millions – of all religious beliefs – visit the dargah of Sufi saint Moinuddin Chisti, whose followers included Mughal Emperors. Close to Ajmer lies Pushkar, a small town which draws an eclectic mix of people. Devotees with vermillion marks jostle with foreigners to see the town’s lake and the temple dedicated to Brahma, one of the trinity of Hindu gods – both held sacred by the believers. The Pushkar fair, the largest camel fair, draws huge crowds and you can buy anything – from camels to dope – easily then.
Read more
Filter Clear All